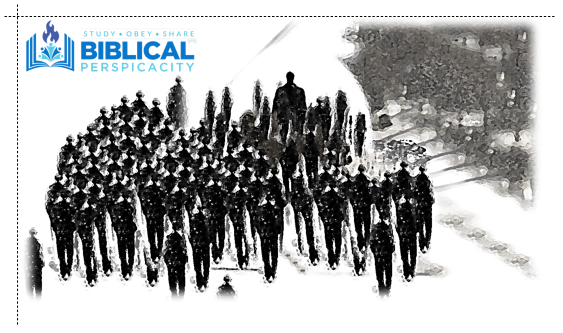 There is coming a day when Jesus Christ will return to this Earth and establish His kingdom over the entire globe. His rule will be both unending and unfailing. At the end of a thousand years, Jesus will release Satan for a short time and allow him to rile up the nations by bringing them to war against the eternal Son of God. We know this because Revelation 20:1-10 describes these events.

While this is the most literal interpretation of the passage, many find this hard to believe. The question typically asked is “If Jesus is literally ruling and reigning on a throne in Jerusalem, then how can people reject Him since He is right there in front of them?” This is based upon the idea that seeing something will always result in acceptance of what is tangible. I would argue that the issue is that, apart from God and His grace, we do not actually want Him.

Those Who Forsook God

Lucifer, along with all of the angelic beings, saw God up close and personal. He was a perfect angel and was placed in the immediate presence of God (Ez. 28:13-17). Yet he, along with a third of the angels (Rev. 12:4), chose to leave God’s presence.

During Christ’s first coming almost two thousand years ago, not even His own people received Him (John 1:10) even though He proved who He claimed to be. Judas, one of original twelve disciples who saw the Lord’s miracles firsthand and maintained a close connection with the Savior for three years, made a conscious decision to betray Him by turning Him over to the religious leaders (Matt. 26:14-25).

Finally, Cain was the very first child ever born into this world. He not only knew that God existed but he knew how to approach Him. God even verbally communicated with him (Gen. 4:6-7). Yet, in spite of this, Cain chose to murder his brother Abel (Gen. 4:8-16). Despite this horrible act of sin, God pursued Cain in the same way He pursued Adam and Eve when they rebelled. However, the sad reality is that Genesis 4:16 tells us that “…Cain went away from the presence of the LORD.” God communicated and met with Cain in a very evident way, and still he chose to reject God by turning his back on Him. Cain’s choice to walk away from God is the same choice many will make at the end of the Millennial Kingdom.

The Bible is clear that none of us seek God on our own initiative (Rom. 3:11). Rather, He is the One who pursues us. Even though Christ will be both seen and heard, there is coming a day when men will reject Him. Why? The reason is because we are evil and we do not naturally want God in and of ourselves. Though Cain will not physically dwell in the future millennium, his example will be followed by multitudes of people and nations.

Amillennialism is the belief that there is no future Millennial Kingdom. Though it is not always the case, many Amillennialists are also Calvinists [basically believing that God has already chosen those who will be saved in the end]. Since one of the arguments generally posed is the one discussed at the beginning of this article – that it doesn’t make sense for people to reject Christ when He is right there in front of them – one could argue that they do not believe because they are not chosen. This ends the argument for the Amillennial Calvinist. However, if the Amillennialist is not a Calvinist, then a different approach ought to be taken.

On a final note, I would also like to point out that the overall argument in question regarding the end of the Millennial Kingdom is not so much based upon Scripture interpretation, but upon one’s own limited understanding. Just as with other passages in Scripture, even if we do not understand why God does the things He does or why certain events unfold the way they do, does not make something any less true.